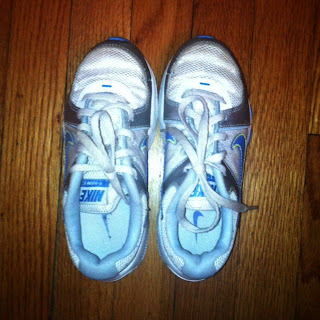 I stood on the painted yellow line and stared at the wooden gym floor. From the corner of my eye, I could see my gym teacher's striped tube socks pulled over his muscular calves, his tightly-laced Nikes pacing up and down the line of elementary school kids. Mr. Foley was a young guy, but an old-school gym teacher. He thought louder was better and usually led gym class kind of like boot camp--sprints, bench steps, rope climbs, pull ups and chin ups. But on Fridays, he gave us a special treat--kickball.

On kickball days, we lined up along the back wall of the gym. Two kids (usually the very athletic ones) we chosen to be team captains. The captains then took turns choosing kids for their teams, one at a time.

I was one of the "smart" kids--much more likely to be found on the playground sitting with a book rather than playing tetherball or climbing the monkey bars. I was also the youngest kid in my class and not at all inclined toward athletics. Small, clumsy, bookish, uncoordinated--that was me.

So I stood on the line and waited. I kept my gaze on my own feet as I heard other kids' names being called. Soon, there would only be one other set of feet on that yellow line--a set of feet that usually belonged to the other smart girl, Noell.

It was in those moments that I first encountered shame. I felt its hot wash cover me as the captains would take long pauses making their decision--which was worse for their team: me or Noell? Judging by the hesitation, it wasn't an easy choice.

In that space while the captains debated, I went to work praying. "Dear God, please let them pick me. I will try so hard to not get out or miss the ball when trying to kick or not tag the kid with the ball when he's right in front of me--oh, please, God, please! Don't let me be the last one left--the one who isn't even picked at all, but just the one left over."

Sadly, it didn't even occur to me that Noell may have been saying a very similar prayer. Or maybe she was a nicer kid than me and didn't wish that "being last" status on me. At any rate, as I waited and prayed, I knew the feelings of judgment and condemnation.

Many times, the choice would be made finally, and Noell would advance to her team and I, taking the prize place of last, would shuffle toward my team where I would hear sighs and snorts and things like, "Oh, great! Now we're gonna lose for sure!"

Let me be real for a moment. I sucked at kickball. I wouldn't want me on my team, either. I wasn't coordinated or strong or aware of spatial relations--all skills necessary to be awesome at kickball. So I get it. Really. But something set in me from my kickball experiences and that was the theme of try harder.

In the midst of my shame, as I took my place somewhere in the far outfield, I became determined to do it right this time. "Think about it, Sarah. Be focused. Know what you're supposed to and do it," went my inner monologue. "Try harder, try harder, try harder!"

Sadly, all my trying and effort never made me any better at kickball. I'm still not very coordinated or strong. But that shame I learned so many years ago? That's still with me, too. So is its partner-in-crime, try harder.

A little over a year ago, God showed me that I still live like I'm in the middle of a kickball game in gym class. In many situations, I still feel like I'm standing on the sideline, hoping and praying that I won't be the last one picked. In scenarios where I have been picked, I've made it my mission to be capable and productive to prove my worthiness to the team--whether the team is a job or a ministry or a social group...just please pick me and I'll show you my worth by being competent. If my competency comes into question, I'll resort to my trusty tool of trying harder.

I've recently been reading the work of Brené Brown, a social researcher who studies shame, vulnerability, worthiness and wholeheartedness. She draws a distinction between belonging and fitting in. She says, belonging is "showing up and letting yourself be seen and known as you really are" where as fitting in is trying to make yourself into something you're not in order to find acceptance. She calls this "hustling for worthiness."

Brené Brown is making me think a lot about kickball.

What contributes to belonging is for us to have a deep understanding of our own worthiness. We understand that we are imperfect, but even in that, we are enough.

When I look at these ideas in terms of my faith, I see how hustling for worthiness and trying to fit in are a lot like trying to earn my acceptance from God--it's never going to work. It's when I can choose to embrace GRACE that I can see myself as worthy. I'm not worthy from a space of trying harder; I'm worthy because I'm chosen by God. I'm enough because He says I'm enough. I'm being perfected--becoming complete--through the love of Jesus.

Because here's the truth about God--He isn't hosting a cosmic-sized kickball game where we are picked for our skills and abilities to get it right for His team. Rather, God's throwing an awesome sit-down dinner party, one where there's a seat at the table for everyone. We're invited to the table because He loves us--just as we are--no fitting in or hustling required.

It's taking me some time to unlearn the lessons of gym class kickball. A lot of times, I allow my inadequacies and shame to define me. I allow myself to settle for fitting in.

But other times, I can hear a heavenly dinner bell and I'm reminded. There's a seat just for me at a table--a table of love and grace and acceptance. It is the place where I find my worthiness and it's the place where I truly belong. When I find myself standing on life's yellow line, I hear God reminding me that it's not about the order in which I get picked, it's about the truth that I am already CHOSEN.
Posted by Crunchy Carolina Girl at 6:24 PM