How I Learned to be an American (or Remembering Mr. Warmack)

"I can't wait until you come back here 20 years from now and tell me that you're a Republican!"

Mr. Warmack, my high school U.S. History and Government teacher, stared at me through his tinted, square metal framed glasses and cackled his unforgettable laugh.  He rocked back and forth on the heels of his worn cowboy boots as he leaned in the plastic chair he sat on as he supervised the lunch hour of my one and only day of in-school suspension.  (That's another story for another day).

It was the spring of 1990 and a few days before my high school graduation.  Even then, I had developed a reputation for being a peace-loving, tree-hugging, granola-eating hippie.  I had a lot of adolescent ideals about the way the world ought to work, and even though I was fairly terrified of Mr. Warmack, I was also quite fond of him.

Mr. Warmack was a cowboy with a twangy accent from I don't know where, exactly. He was the type who was temperamental, generally boisterous and known to throw things--like chalk, erasers and occasionally chairs. He was a tough grader and not known for giving out A's. These were the things I'd heard about him before stepping into his classroom.

Once in his class, I found all those things to be true. But I also found a man who was passionate about helping kids understand the systems of government and what it meant to be an American citizen. He was also funny, animated...and conservative. He would often go on passionate rants, flinging his wiry frame back and forth in front of the green chalkboard, rubbing his hands through his sandy hair, as if a tousled head would help us get his point.

Through two years of "Warmack," as we affectionately referred to him, I'd learned all kinds of things about the American Revolution, the system of three-part government, the order of the presidency, and the disgrace of "kids these days." But I hadn't learned to give up my point of view.

And so we sat, Mr. Warmack & I, on one of the last of my days under his wing. He was sure I'd eventually let go of my youthful, rose-colored glasses; I was sure I never would.

I didn't ever make it back to visit Mr. Warmack as an adult.  My visits to my hometown are infrequent and, sadly, Mr. Warmack passed away a couple years ago after a tragic accident.  I never got to have round two of that discussion, where I smiled into those spirited eyes and told him that I'm still a peace-loving, tree-hugging, granola-eating, earthy-crunchy liberal, but that he was still one of the best teachers I ever had.

Today, as I stood in line to vote, I remembered Mr. Warmack and the most important lesson he taught me.  As an American, it is not simply my right to vote; it is my responsibility.  It is my privilege and honor and brave men and women have fought and died to secure this right for me.  Our country may be divided; it may be a mess.  We may have a lot of work to do, but we must do it together.  Thank you, Mr. Warmack, for teaching me what it means to be an American. 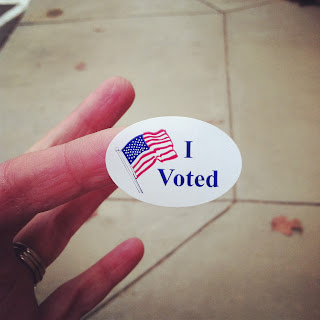 Posted by Crunchy Carolina Girl at 9:10 AM