I often tell you about Matthew here...how everything was fine with my pregnancy until the day he died.  But I've never written about my pregnancy with JL.  See, she is my miracle baby and she has a story worth telling.

J and I started "trying" sometime in 2003.  After several months of not conceiving, my doctor decided to be proactive.  She ran some base-line blood tests and concluded that I was not ovulating and recommended fertility treatments.  We were devastated and took a month off from trying to think and pray.  It was sometime during that month that I realized it had been 45 days since my last cycle.  To our shock and wonder, we found we were, indeed, (miraculously) pregnant.  We were ecstatic for about six days...until I woke up bleeding.

We knew this wasn't a good sign, but were trying to not panic.  We went in to an ultrasound with a doctor we didn't know and were relieved to see our baby's flickering heartbeat.  The doctor, however, was not encouraged.  He looked at the tiny thing and said, "I don't mean to burst your bubble, but this one isn't going to make it."  WHAT?  Burst our bubble? How about break our hearts, I thought.  He went on to explain that the baby was too small, the heartbeat was too slow, and that, in his medical opinion, it wasn't a matter of IF we would lose the pregnancy, but a matter of WHEN.  We left completely devastated.

But, we knew God had allowed us to become pregnant when the doctors said we wouldn't be able to.  We knew we believed in miraculous healing.  In fact, my husband was in the middle of a 4-week teaching series at his mentor's church on the topic of divine healing.  That Sunday night, after he gave his Biblical outline on healing, he told the gathering that this wasn't just some pie-in-the-sky ideal for him.  His wife was sitting there, 6 weeks pregnant, with a diagnosis of impending miscarriage.  But we were praying for divine healing.

Within moments, I was surrounded.  Hands covered me.  Prayers for healing for my child swirled around me.  Voices cried out to the Lord for mercy and for LIFE.  Tears flowed from my eyes and they eyes that looked on me with love.  I knew we were not alone.

I returned to the doctor the next week for a follow up ultrasound.  Heading into that appointment, I was emotionally prepared for the worst, but hoped that the baby would just still be alive.  Relief washed over me as I lay on the ultrasound table and saw that tiny whoosh-whoosh of a heartbeat.  My doctor (my regular doctor, not Dr. Doom), smiled and told me confidently that this looked like a completely normal pregnancy.  The cause of the bleeding was gone, the baby had tripled in size, and the heartbeat had doubled.  She had no explanation for the turnaround, but I did.  We know that one of two things happened to our baby...either the first diagnosis was just plain wrong or the Lord healed our child.  We choose to believe the latter.

We returned to the church that next Sunday night and shared our great news.  This group of people continued to pour out prayers for the life of our baby.  In so many ways, these folks carried her in their hearts equal to the way I carried her in my womb.  And after she was born, when we visited there, they asked, "how's OUR baby doing?"

If you asked me to describe in one word how JL is, I would have to say "lively."  She is a child who is so full of life.  I believe, completely, that it is because so many people prayed so fervently that she would have life.  She has life, in full measure.

If you are familiar with the Exodus story, you know that the Israelites built altars to remind them what the Lord had done for them.  JL's name is derived from that story.  When we look at her, we remember what God has done for us and His faithfulness.  She is our living altar.

Here is a picture of her from the day she was born.  She was beautiful then and is even more lovely now.  Happy birthday, our sweet miracle baby! 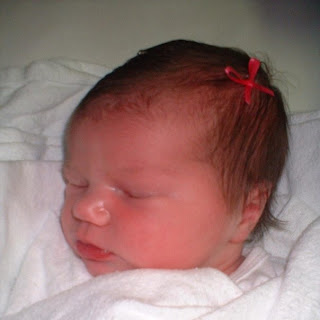