Levine Museum of the New South 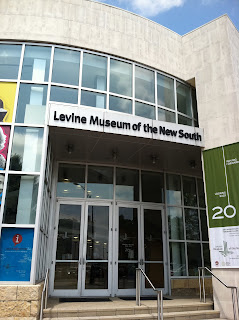 I visited the Levine Museum of the New South this morning. I've lived in Charlotte for almost 16 years and never been before.  After one visit, I've decided that is a shame.  There is SO much information contained in one building.  I stayed for about an hour and a half...a little less time than I put into the parking meter and a little more than my heart could handle.


In that 90 minutes, I read about slavery, sharecropping, cotton farming, mill work, child labor, Jim Crow, disenfranchisement, the KKK, lynchings, civil rights, segregation, lunch counter sit-ins, the role of the church in the New South, busing, the loss of farm land, and the rise of NASCAR and multi-national corporate headquarters in the region.  And I didn't even look at/listen to everything.  As I walked out the door, I felt like I needed to have a big cry.


I didn't grow up in the South, but when I moved to the South at age 21, I felt like I was "home" for the first in my life.  I love the South.  I love the weather, I love the accent, I love the good parts of the culture.  I'm also woefully ignorant of the full history of the place I live in.  Part of that is intentional...I tend to avoid sad things.  But, part of it is unintentional, just by virtue of not living here my whole life.  I'm part of the "new migration," of the hundreds of thousands of people who have relocated here over the past two decades.


As I looked at pictures of people, I tried to look deeply at their faces.  I talked to God about them...acknowledging that they were each one of His beloved children.  I thought about how difficult their lives were.  People, this region was poor...P.O.O.R.  I can't imagine asking my kids to be out in the cotton field with me or in the mill...because we needed them to work so we could eat.  I saw pictures of Mamas with babies strapped to them, followed by little children picking cotton.  I saw stories recalling children not knowing where their next meal would come from.  I saw pictures of children whose fathers were targeted for assassination because their Daddies wanted them to be able to go to school or ride a bus instead of having to walk 9 miles to and from school.  Oh, my heart.  I stood and looked at the stats from the 1999 court ruling that ended busing based on race in CMS and reflected on my own daughter's school...predominately white and upper middle class.  I love her school, but as I stood there, I wondered, is this right?


I will have to go back to this museum many more times.  I will have to go often so I can digest it in small chunks.  There is so much to this place that I love, the place I call home.  So much hurt, so much to be redeemed.
Posted by Crunchy Carolina Girl at 12:48 PM