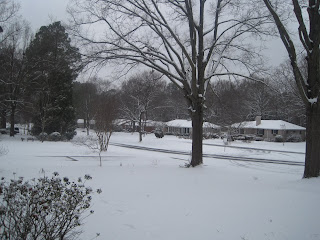 I live in the South, where snowstorms are a big deal. They don’t happen often (thankfully!), people don’t know how to drive in them, and the cities generally aren’t equipped to deal with snow in a timely fashion. So, I understand why they are a big deal.

In Charlotte, even the lightest dusting generally gets school canceled, offices closed, the sidewalks rolled up. :) When I first moved here from Colorado--where snow is a regular occurrence and we didn’t even bother to check if school was canceled until there was 3 feet of snow (seriously)--I couldn’t believe that such a fuss could be made out of a little snowstorm. I laughed...until I drove to the grocery store.

In that trip, I learned that a) people here really cannot drive in snow, and b) they panic and buy up all the milk, eggs, and bread, for fear they will be snowed in for a week. A week in which the only thing they will want to eat, apparently, is french toast.

Having lived here for 15 years now, I get it. Snow is a big deal. Kids of all ages enjoy the novelty of playing in it...and it is pretty.

I hate the snow. Carolina’s temperate weather was one of the factors that drew me here. The thought of very little snow was appealing. People often say to me, “you must be used to this, growing up in Colorado.” Used to it, yes. Like it, no.

While all my Facebook friends and kiddos are overjoyed about a snow day, I find myself huffing and puffing, feeling about the snow like the green guy in Dr. Seuss’ story does about Christmas. I wish it weren’t here, I wish it would go away. But, in order to stuff it all into a bag with intent on stealing it like he does, I’d have to go out into it. And that’s not gonna happen. Like I said before, I hate snow.

So, snow bunnies, enjoy yourselves. I’ll be holed up inside, next to my fire place, watching my sweet monkeys romp around through the window, boiling water for cocoa for when they come in. And maybe, just maybe, enjoying that...just a tiny bit.
Posted by Crunchy Carolina Girl at 9:23 AM 2 comments:

Today is your due date. And you’re not coming to live with us. Of course you’re not--you were born on July 30th--physically born anyway. Your soul was already with the heart of Jesus. I’ve had five months and four days to get used to the idea that you wouldn’t be coming. But knowing that has done little to make today easy.

I’ve spent most of the last five months thinking, “I’m supposed to be pregnant.” Because if everything had gone as I hoped, prayed, and planned, I would have been pregnant from August through the end of December. And then you would have arrived sometime in the last week or so...just hopefully not on Christmas Day or on your brother’s birthday (January 2nd). I so wanted your birthday to be a special day, all for you.

But, sweet boy, it isn’t up to me. You aren’t here and you’re not coming. I know you’re in a great place, the better place to be. But I am ever so jealous of Jesus, that he gets to be with you today and I don’t. At least not in the way I want. 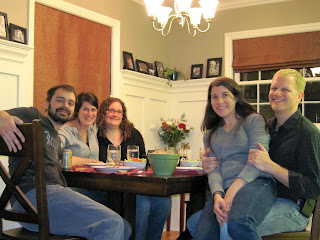 New Year's Eve at my house means Fondue Night. For the past five years, J and I have hosted friends for an evening of feasting, reflection, anticipation and fun. We do the whole deal...cheese, veggies with sauces, chocolate--it is yummy AND a great way to ring in the new year! You have to linger over fondue, so it lends itself to great conversation. We love our tradition and our friends with whom we share it!

Since I am gluten-free now, I was on the lookout for a way to make cheese fondue sans flour. I found this recipe for Gluten Free Swiss Fondue. It was delicious and you couldn't tell it was gluten free. Yummy part of a great night!
Posted by Crunchy Carolina Girl at 7:17 PM No comments:

I enjoyed and recommend each one.

Posted by Crunchy Carolina Girl at 6:39 PM No comments: