Take the Kids to Disney 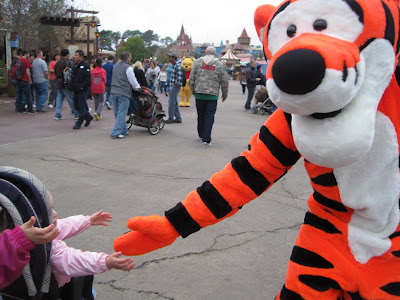 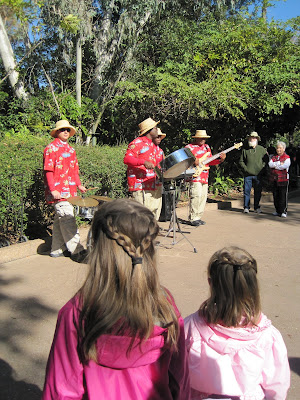 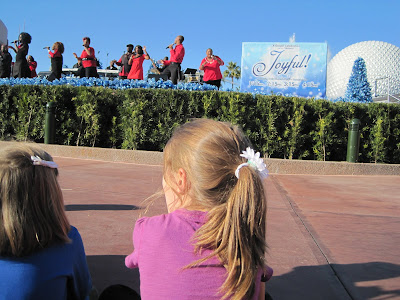 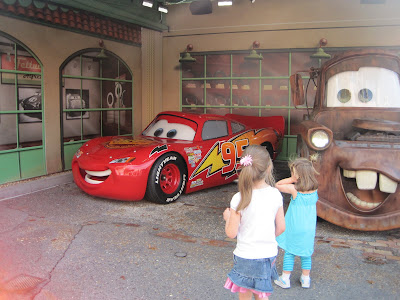 Meeting Mater & Lightning McQueen
Last week, J & I loaded the kids in the van and headed South to Orlando. We've been wanting to take the kids to Disney for a while...it is a special place to us as it is where we spent our honeymoon (long story) and our girls have been asking to go to see the Princesses and to Mickey Mouse's Clubhouse for a while now. After Matthew died and we realized that our winter plans weren't to be what we thought they would, we decided to take the trip. I also needed something to look forward during this time (my due date was Jan. 3rd...more to come on that in another post).
We stayed at a wonderful resort, Buena Vista Suites, thanks to my sweet Aunt Lesa who works for their parent company. We packed our 4.5 days in Orlando FULL! Sunday was Magic Kingdom, Monday was Animal Kingdom, Tuesday was Epcot, Wednesday was Hollywood Studios, and Thursday was half a day at Downtown Disney before the l-o-n-g car ride home.
We had a lot of fun, but we also exhausted ourselves. I learned several things.
1) I really love Disney World and think they do entertainment better than anything else that I have experienced. I know it is cliche and expensive, but I really enjoy it.
2) They were amazingly accommodating of a Gluten-Free diet! I had to wait longer for my food and typically had to speak to the manager, per their policy, but most places had GF options and info was readily available at Guest Services. That made mealtimes go so nicely.
3) The sit/stand stroller that I borrowed from my friend KA made THE difference in our being able to enjoy our days. When necessary, we could get two kids sitting & one kid standing on the thing. Otherwise, we'd have been pulling our hair out.
4) The holidays are really, really crazy there. I've always heard it was very crowded this time of year, and YES, that is true. Very, very crowded. The day we went to Epcot, I almost had a panic attack in the cafeteria because there were so many people. I realized that I really don't like crowds. I knew this about myself, but thought I could emotionally muscle my way through it. It was a bit too much for me and the crowds were the one downside to the time.
5) Getting one of those little guide/hint books would have been well worth it. We wasted a lot of time trying to figure out where to go, what to eat, where the character meet & greets were. I wish I'd done a little more homework on the front end.
6) Four theme parks in four days is a bit much for a Kindergartener, preschooler, and toddler. And for their mommy & daddy. If you go, plan in a buffer/rest day.
7) We went to a lot of the shows/performances while we were there. Finding Nemo the Musical, the Lion King, Beauty & the Beast Live...and my JL was captured by the art of live performance. She is obsessed with ballet and was always a star singer in the preschool chorus. And watching her watch the performances was really spell-binding. It was almost as if, at six years old, she really understands the artistry of such things. She's not the kind of kid who is a ham and wants the attention that being on stage brings. Rather, she's captured by the grace of movement and music and sees the joy in it.
I watched her fixed on the ballet-dancing "birds" in the Lion King, and began to ask myself about my expectations for her. I wondered how I would feel if that kind of thing was what she wanted to pursue as a grown-up. While I see those actors/dancers/musicians as incredibly talented, how would I feel if that is what she wanted to be, instead of a doctor or architect or teacher or social worker or...? It has made me wrestle a little bit with what I define as successful and what kind of dreams I have for my kids. Do I really want to allow them to pursue the desires of their hearts? Or am I going to manipulate them based on what I think is best? I hope the former, but (shamefully) I have dealt a little with some slight expectations that she would be "more" than a ballerina or actor. But, I hope that I can move into a space of feeling that 100%, really, if that is what she wants to be, then that is what I want for her.
Overall, we had a blast. The kids found it magical, we rejoiced in being blessed enough to give them (and ourselves) this gift. It was a great diversion and time for our family. We can't wait to go again.
Posted by Crunchy Carolina Girl at 5:42 PM