Why I Filled My Tank at BP

Life is full of tough choices and hard decisions. And I had one to make the other day when my van's tank was running close to E.

If you know me at all, you know I'm pretty crunchy granola. I love God's creation and creatures so much, especially the ocean and beach. So, this BP thing has been devastating to my heart. I can only watch about 5 minutes of CNN coverage before I feel literally nauseated by all the damage. I hate what it is doing to the environment. I hate the effect it is having on all the people who live and work in the Gulf. I hate how it makes politicians and pundits point fingers and cast blame. I hate what it says about our petrochemical-dependent society. I hate it all and I just want to do something to help. And I feel really helpless.


On the major intersection near my house, there are gas stations on three of the four corners...BP, Shell & something else I can't remember. The BP is the hardest for me to get to, is usually more expensive, and always crowded. Yet, I typically buy my gas there. And the other day, after a lot of soul-searching, I pulled my van in there and fueled up.

Why? The answer is Ron.

Ron owns the BP station on the corner and Ron is my husband's friend. Ron is a really hardworking guy. He has kids similar ages as our kids. His cashier station is full of drawings by his kids and pictures of his babies. Ron is the kind of guy who takes care of his friends. He has often worked my car in for maintenance or an oil change, whether it is that my car broke down or that he just knows I have to pick my kids up by a certain time. On hot days, Ron has given me and the baby rides home, even though he knows we live close enough to walk, but he understands that it is not fun to carry your baby even 1/2 a mile in 90 degrees. He's a good guy.

I know a lot of people are boycotting BP. And in a lot of ways, I agree with those people and their stance. And if it was the Shell station across the street whose mega-corporation screwed up the Earth, I'd be boycotting them, for sure. Ron's station got picketed the other weekend. (Ron's response was to hold a Dawn dish soap drive for the animals who need cleaned up). I get the boycott. I really do.

But again, I go back to my breaking heart and my desire to do something to help the situation. I realized when I was struggling over buying my gas from Ron or pulling into the easier, cheaper Shell station, that there was something I could do to help a specific someone affected by this disaster. BP corporate isn't going to suffer significantly if I don't fill up the Honda there. But Ron will. Ron will suffer if his regular customers like me all decide to take out their anger on BP by buying their gas from someone other than him. And so, I made my tough choice. I chose friendship over ideals, local over global. Life is full of hard choices. But for me, for now, I think I made the right one.
Posted by Crunchy Carolina Girl at 6:02 PM 1 comment:

My dear hubby J loves Indian Food. For unknown reasons, I'm terrified of it. Perhaps it is because they simply don't have Indian food in the small mountain towns of Colorado where I grew up. Maybe it is because I like to understand what is in my food and it seems really hard to do that with Indian dishes. Anyway, I get overwhelmed whenever I'm asked to go eat Indian.

This past week we were in Michigan with J's entire family (2 parents, 3 siblings, 3 sibling spouses, 9 nephews/nieces, plus the 5 of us--in one house). That deserves it's own post...another day. One night, we went out to eat with his two brothers and sister-in-law. They all love Indian food. Again, it scares me. We had a nice waiter who listened to my list of requirements (vegetarian, gluten-free, not too spicy) and told me I was to order #42.

YUM! There were a variety of veggies (green beans, cauliflower, carrots, peas, I don't know what else) in a creamy, mildly spicy curry sauce. I really liked it. And it made me feel a little more adventurous about trying some other Indian dishes. Too bad my helpful waiter is in Michigan. :) 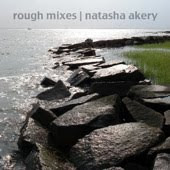 I haven't bought any new music for myself in a really, really long time. I'm talking like since your only choice was a CD. (Ok, I did download U2's last album, but that doesn't feel like it really counts because 1) I've never even listened to it and 2) I've been listening to them since I was 12 years old, so they aren't exactly new-to-me artists--but I digress).
So when I got an email from my Holy Yoga classmate, Natasha, saying that she'd published an album, I waited about 5 seconds before I got myself on iTunes to get it. You see, Natasha's one of these crazy talented women. In addition to being an amazing singer-songwriter, she's a Hebrew scholar, a poet, a serious yogini, with wisdom beyond her years, and that je ne sais quoi that puts people at ease and makes them laugh a lot. I got to hear her play and sing while in Arizona and her songs had lingered with me ever since.
Rough Mixes is a delightful mini-album. Natasha's voice is rootsy-angelic, like this cherub's got some dirt on her wings. In a good way. The lyrics are vulnerable, the tunes soft and clean. Farm Boy is my favorite. Check her out here. Thanks, Natasha, for sharing your gift. Can't wait for your next album!
Posted by Crunchy Carolina Girl at 8:52 AM No comments: 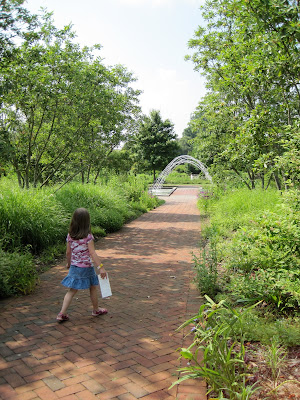 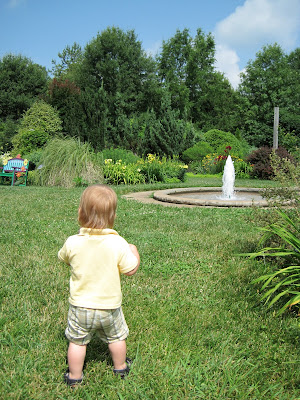 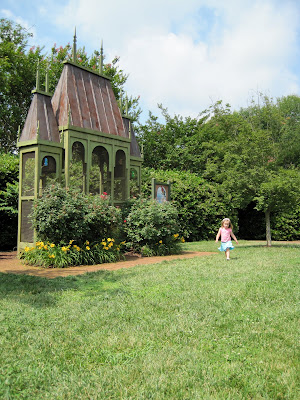 When the kids are on break from preschool, we try to have a few field trips to keep us all sane. 'Cause I'll be real...we all miss preschool when it's not in session. :)

So, the other morning we set out toward Belmont to explore the Daniel Stowe Botanical Gardens. My kids are big nature lovers (crunchy like their Mama) so they were super excited. It was a really fun morning of exploring the plants and gardens and looking at the sculptures.

We ended our trip with lunch at the Cherubs Cafe in downtown Belmont. It is an old-fashioned diner run by Holy Angels, a charity that supports and houses people with developmental disabilities. The restaurant is staffed by adults with developmental disabilities and it was a really sweet experience. It made me miss the times in my life that I was privileged to work with folks like that. It warmed my heart to see people at work in a meaningful way and to be able to participate in that. And to share it with my kids.

Great field trip. One with lots of little gifts.
Posted by Crunchy Carolina Girl at 4:52 PM No comments:

My Second Saturday Book Club reads great books. July's pick is The Help by Kathryn Stockett. Set in Jackson, Mississippi in 1962, during the early days of the Civil Rights movement, this uplifting novel tells a heart-warming, if a bit contrived, tale of three women who want to make the world a better place. Skeeter is a white girl who bucks the roles of Junior League Secretary and the Senator's son's girlfriend to take part in a secret mission. Abilene and Minnie are African-American maids who risk everything to help Skeeter in her quest. And that's all I'm going to say, because you really will want to read this one, too. This isn't great literature, but it is a compelling story that I really enjoyed. I'd say it's a lot like The Secret Life of Bees, only if that book is an A, this book is a B+. I read the whole thing (and it's a big book) in three days. I didn't want to put it down. I hope you will enjoy it, too.
Posted by Crunchy Carolina Girl at 3:57 PM No comments:

Six weeks ago tomorrow, I returned home from one of the most amazing weeks of my life with my Holy Yoga Instructor certification in hand. The week was incredible. We were in the middle-of-nowhere Arizona, in the high desert, a land that is simultaneously stark and beautiful. I was reacquainted with my love for the outdoors and spent every moment I could outside. I met fabulous women (& three men) from all over the US, Canada & Japan whose passion for Jesus was tangible. Together we shared life, laughed, and cried. And the yoga...it was excellent. I've never worked so hard physically in my life. We were taught by very talented instructors who know their yoga, but it paled in comparison to their love for the Lord and their dedication to the calling He has placed on their lives. They set the bar high for us as instructors, but were so encouraging to us about how He will use us to further the Holy Yoga mission. Seriously, one of the best weeks of my life.

So, I've needed to write this post ever since I got home. And you'd think that it would be easy and exciting to write this one. But it hasn't been easy and I keep putting it off. Why, I wonder. For one, it has been hard to write because I don't know where or when I am going to be teaching Holy Yoga. God's had me waiting. I'll be honest, that has been really hard. I watch my classmates starting their classes, and while I'm so happy for them, it's been painful to wait for my answer. But, He is good, and I am sure of my calling. It will come.

The other part that has been holding me back is that I feel like if I write this post, it is somehow admitting that my training is over. And there is part of me that really doesn't want that season to be finished. As excited I am to be heading into whatever is next, the five months of my training were simply amazing, and I am sad that time is done. I can't completely wrap my brain around what I'm feeling, I simply know that it is what it is.

And so, I'm posting. I'm a certified Holy Yoga Instructor. That's true, whether or not I am actually teaching yet. It's by His grace and goodness that I've been led on this journey and I choose to continue to follow Him as he leads me. And I know that my time of training isn't really over either. It just looks different now.
Posted by Crunchy Carolina Girl at 3:30 PM 2 comments: