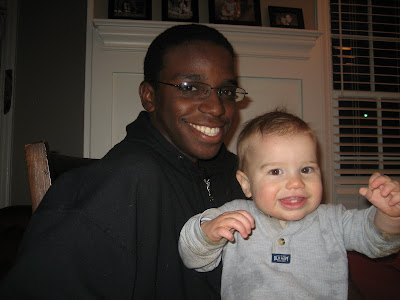 I met Dexter when he was in the 5th grade. He was my then boyfriend's kid neighbor. After J & I got married, Dexter & I began spending a lot of time together. He was always a great kid. I got to help him with his homework and he helped me cook and was always eager to try whatever we made. When I had JL, he was so excited to have a baby "step-neighbor." He's been like a big brother to our kids. When we were moving, JL cried when she found out that Dexter wouldn't be moving with us to our new neighborhood. I've gotten to see him grow from a cute little kid to a respectable young man. Dexter is now finishing up his sophmore year at Tuskegee University. When I first met him, he told me that he wanted to be a veterinarian. He's now working on his degree in veterinary sciences. It's been such a gift to be able to be his friend all these years and watch him pursue his dreams. Because we love him so much, the girls & I made him some m&m cookies to help get him through finals. :)
Posted by Crunchy Carolina Girl at 5:26 PM