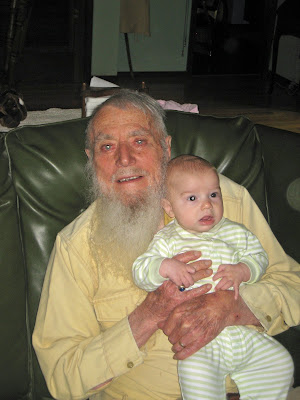 Granddad is my Dad's father. He's 92 and (seriously) lives off whole milk, Hershey's bars, and butter. Until the past few years, he also enjoyed red meat and ice cream on a daily basis. After a visit to his house, I sometimes wonder if I'm doing everything wrong...avoiding meat and fat, choosing vegetables and grains. :)
While his body is starting to slow down, his mind remains in tact. In his nineties, Granddad has started writing and self-publishing books. He really enjoys pursuing that passion. And it truly is a pursuit, because Granddad is nearly blind. Yet he still works to be able to use his computer on a daily basis.
And Granddad is a character. He loves talk radio and discussing politics. He reads his Bible cover to cover every year. He's been growing that beard since I was in high school, so for about 20 years. My husband thinks he looks a little like Moses.
Something that also makes him a good character (per my Don Miller influence), is his story. In his young adulthood, Granddad was an alcoholic. I never saw it, but from the stories I have heard, it wasn't pretty. He also lost his first wife, my Grandma Jane, to an ugly battle with cancer. But in the aftermath of that, he allowed himself to know Jesus' love, gave his heart to to God, and never took another drink. He really is an inspiration in that regard.
Because Granddad is my oldest living grandparent (and because he took a potentially serious fall last weekend), I decided to make his letter my first one. While the content of that letter is private, it included thanks to him for his constant encouragement to me to pursue God's love for me, even when a relationship with the Lord was the last thing on my mind.
Thanks for who you are, Granddad. My world is more colorful because you are a part of it.
Posted by Crunchy Carolina Girl at 5:36 AM